The sensus divinitatis means we all have an innate sense of God, and this sense leads us to seek God. Does this mean if we don’t hear the gospel we were ignoring our sensus divinitatis? In other words, is someone who has never heard the gospel news damned? Wow, what a loaded question…

As I continued my reading of Colin Brown’sbook, 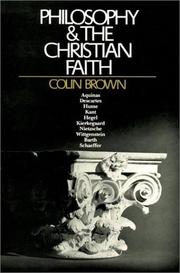 Philosophy and the Christian Faith: A Historical Sketch from the Middle Ages to the Present DayColin Brown; InterVarsity Press 1980WorldCat•LibraryThing•Google Books•BookFinder I have to make a break with him.  Last week, I said here, that Brown made a persuasive case for the presuppositionalist approach to apologetics. He does do that, but in his final chapters an conclusion he goes beyond presuppositional apologetics to a Reformed Epistemology approach.

What is the difference between presupposition and reformed epistemology?

A presuppositionalist begins with the assumption of God’s existence and argues from that perspective to show the validity of Christian theism. The reformed epistemology approach is quite similar, but includes something called the sensus divinitatis, or an innate sense of the divine.

Steven B. Cowan gives an excellent overview of the 5 most common apologetic approaches in the the book, Five Views on Apologetics.  According to Cowan’s typology, the reformed epistemology method states that it is reasonable for a person to believe in things without objective evidence.[i] This does not mean that positive arguments for belief in God are not useful; they just are not necessary.[ii] Rational arguments are not necessary because, according to Calvin, all human beings are born with an innate sense of the divine.[iii] Thus the proper focus of reformed apologetic is defensive, countering challenges to theistic belief.[iv]

This sounded like an ok perspective to me until I read Brown’s amplification of it. According to Brown all people have a sensus divinitatis, or an “awareness of God regardless of whether they have heard the gospel and regardless of whether they respond or not.”[v] This awareness is the point of contact for believers to share the Christian message, and is what “clinches man’s guilt in his persistent turning away from God.”[vi]

I have two problems with Brown’s assertions. 1: A person’s innate sense of the divine can be distorted both by their own sin, or by another’s sin. For example, during the years I was abused I lost faith in a God that claimed to love me, but didn’t protect me. Was this my own fault? Would I, if I had died during this time have been damned?

The 2nd problem is that the reformed epistemology approach limits apologetics to a purely defensive discipline.  According to Colin and others, the effects of sin are so strong  that we cannot possibly build common ground with a non-believer. Our presuppositions are opposed.

I will grant that most people do not come to faith by a reasoned and well thought out logical argument, but some do. My Christian Philosophy professor did. My own mother did as well after years of struggle with the  tension she imagined between a scientific and a Christian worldview.

So what do you think of the sensus divinitatis? This week I have only been exposed to Brown’s ideas about Calvin’s idea of sensus divinitatis. Next week, we will go straight to the source, Calvin himself, and see what he had to say.

Liturgical Church for a new generation